Online Startup Investments Have Grown by 470%

As we approach the end of 2021, it’s a good time to reflect on progress made in the online private market. By looking at how far we’ve come, we can keep a healthy perspective on where we are – and stay excited about where we’re going! This Chart of the Week considers growth in the amount of money raised from January 2018 to November 2021 for companies raising capital through Regulation Crowdfunding. 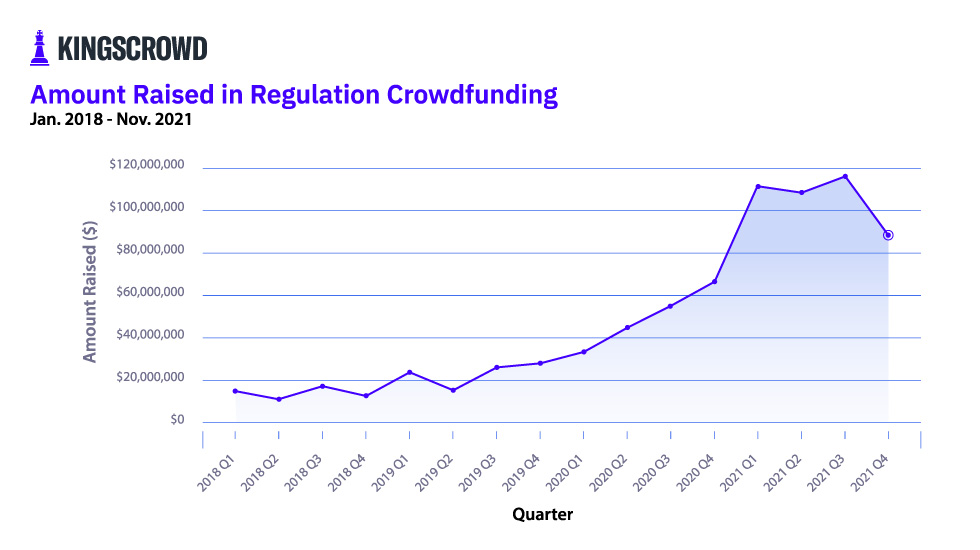 Online startup investing has clearly become more popular and the amount raised by companies has increased. The first quarter of 2018 ended with just 128 new raises, while quarter one in 2021 ended with 261 new raises. In just three years, the number of new raises occurring in the first quarter more than doubled. Growth in the amount of money raised from the beginning of 2018 to first quarter 2021 is similarly astonishing. Nearly $15.5 million was invested in early 2018. In the beginning of 2021, we saw capital raised increase to an amazing $112.8 million – a 627% increase in the amount of money raised.

Overall, we see strong increases in the amount of money raised via Regulation Crowdfunding. From early 2018 to midway through the fourth quarter of 2021, we’ve seen a 327% increase in the total number of companies raising funds. In that same time period, the total capital raised grew by 472%. The sharp rise that occurred in the first quarter of 2021 could be partially attributed to the new $5 million raise limit that went into effect in March. It’s also important to note that the decrease shown for the fourth quarter of 2021 is likely due to incomplete data. December has historically been a strong investment month and will likely drive the capital raised total back up.

The steady increase in the number of raises and amount raised is an extremely positive indicator for future growth in the online private equity markets. Equity crowdfunding is proving to be a promising opportunity for companies looking to raise capital and for investors looking to get involved on the ground floor of young startups. We expect to see this trend of growing investments continue in the coming years!

What does it mean that the company’s accountant is “independent”?

Every company offering securities to investors under Regulation Crowdfunding (“Reg… ...