Given the decentralized nature of online startup investing, you might guess that startups have become less localized to specific regions. Ideally, founders from across the country should be able to establish companies in their hometowns and eventually scale nationwide with the help of equity crowdfunding. Young companies no longer need to hover around Silicon Valley to eventually acquire venture funding. This shift should make entrepreneurship less regionally divided and more accessible.

This Chart of Week examines whether startups are becoming less localized or not. We analyzed the state of origin for all equity crowdfunding raises from January 2018 through October 2021. And while online startup investing has made location less strict for companies, we still see that certain regions dominate in the country. 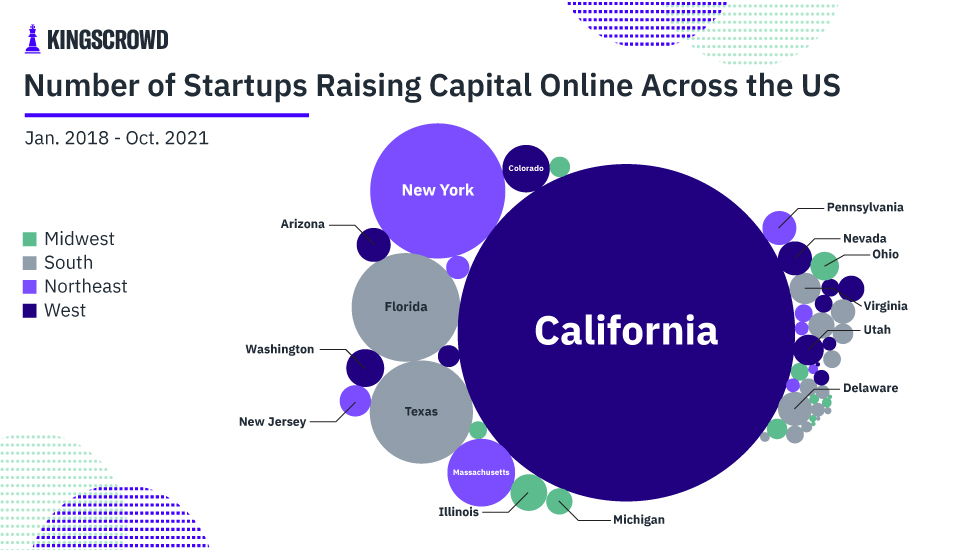 California remains the leader in pushing out new companies with New York, Florida, and Texas following in its footsteps. Out of more than 3,000 companies, 868 of them began in California. This result isn’t too surprising given that Silicon Valley has long been a center for startup innovation. It is a community that supports risk taking, diversity, education, mentorship, and imaginative thinking. To date, 39 of the fortune 1000 companies are headquartered in Silicon Valley alone. And before online startup investing, companies needed to be close to the region in order to have a good shot at receiving venture capital. So it makes sense that California continues to be a leader in producing startups.

After California, there were four other states that were home to 180 or more startups — New York, Florida, Texas, and Massachusetts. It is interesting to note that when looking at regions of the US (as defined by the Census), the South surpassed the Northeast in the number of startups. Just under 900 companies that raised capital online came from the South, while 775 began in the Northeast. While California had nearly as many companies as the entire South, these figures do seem to indicate that the decentralization of startups is happening.

While it is not easy to replicate Silicon Valley, there is a push to build “regional clusters” of startup ecosystems. Regional clusters act as an anchoring point for startups to learn, grow, and be connected to resources that they wouldn’t have otherwise. They can be tremendously helpful for young startups and can accelerate the growth of startups tapping into equity crowdfunding options. As the democratization of startup investing continues to grow, we expect to see companies continue spreading across the US.

Lessons From a New Startup Investor

Some lessons from this brand-new startup investor include: do your… ...

We have compiled all the KingsCrowd Deals to Watch, Neutral… ...

KingsCrowd has aggregated the latest startup crowdfunding deals from across… ...