I saw a commercial the other night for the new DirectTV remote that is powered by Google Voice. In addition to changing the channel, now you can control your lights, your thermostat, and your speakers all through your TV remote.

There is no shortage right now of smart technology and products that fall under the Internet of Things (IoT) label. Powering all these innovations are advances in software and technology. And it appears that a fair number of the young startups fueling these advances have found Reg CF to be a viable source of funding. That’s why this week, the focus is on Software companies.

Software companies make up a significant portion of the offerings in our database, with 217 offerings (20%). The interesting thing about this group of offerings, is that while other industries I’ve taken a look at seem to “share the wealth” and spread out their offerings across platforms, nearly half (45%) of all offerings are posted on StartEngine, with the nearest competitor (Wefunder) only getting 15% of the offerings. 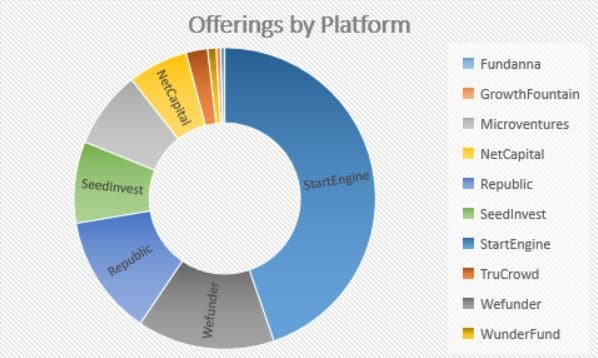 On average, these offerings are looking to raise a minimum of $39,000, which is just under the average offering minimum we have seen in the past year. And it may be a function of these low offering minimums, but the average amount raised for the successful offerings in the sample is $118 thousand, with one offering maxing out at $1.07M (Solutions Vending International), and only two other offerings raising over $500 thousand. This average comes in below that of Retail, Medical, and Food and Drink. This could potentially be a function of the low targets, but may also be related to the low valuations of these companies ($7.7M)

The software companies of today look a lot different than my concept of software as a kid (anyone remember Roller Coaster Tycoon…it’s back in app form now!). Firms seeking to raise money through Reg CF include a company that makes coding robots of girls, an all-in-one urban planning platform, and the grocery store of the future. The software umbrella is quickly expanding (almost as much as the IoT universe), and there are a number of companies out there looking for your investment. So now’s the time to turn to your Google Home and say “Hey Google, find me a software investment!”

The latest equity crowdfunding deals from across more than 20… ...

The latest set of startup equity campaigns from across 40+… ...