Now that 2022 is over, it’s time to take stock of the year. So we’re going to evaluate the performance of the crowdfunding platforms that hosted online startup equity raises last year.

In 2022, KingsCrowd tracked 1,611 equity deals across more than 30 different platforms. In order to make a fair comparison, we’re splitting our data into two charts: Regulation A (Reg A) raises and Regulation Crowdfunding (Reg CF) raises. Let’s start with the top performers for Reg CF. 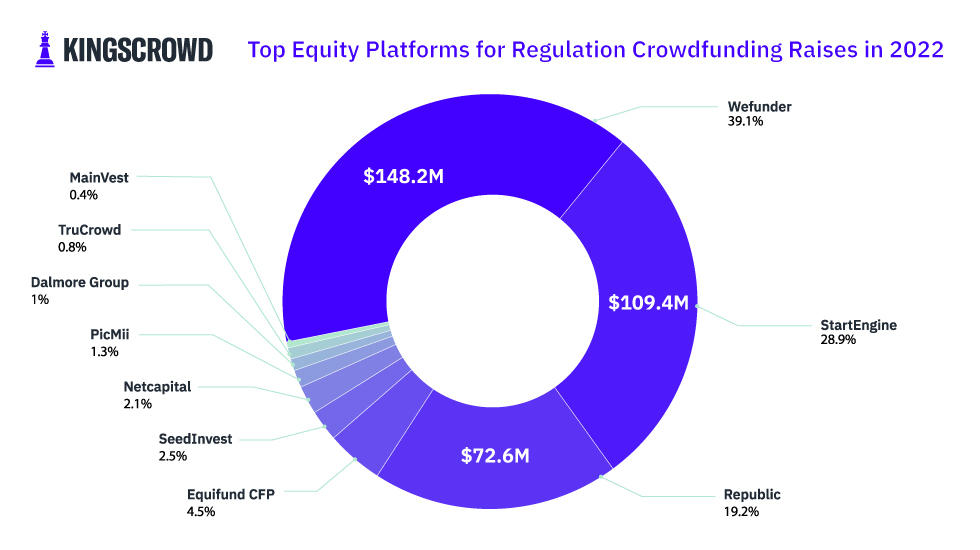 Wefunder continues to dominate the Reg CF side of online startup investing. With nearly $150 million in total dollars invested, Wefunder’s raises account for just under 40% of all Reg CF dollars in 2022. StartEngine and Republic round out the top three. Together, these three platforms accounted for more than 85% of all dollars invested in Reg CF deals. That performance continues the trend we observed last year. Wefunder, StartEngine, and Republic are the clear industry leaders when it comes to Reg CF deals. 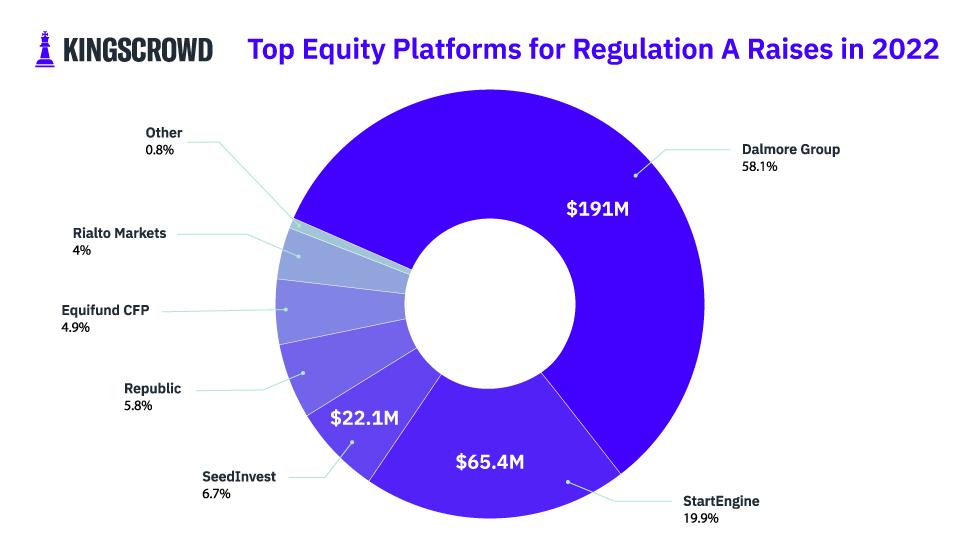 Across the Reg A deals that KingsCrowd tracked in 2022, there were eight main platforms. Dalmore Group stands out as the obvious industry leader here. Nearly $191 million was invested in Dalmore Group Reg A deals last year — that’s 58% of all dollars in Reg A raises. StartEngine and SeedInvest finish out the top three. That’s notable, since StartEngine intends to acquire SeedInvest. That acquisition would help secure StartEngine’s strong position in the Reg A market. So we may see StartEngine move to the top of the ranks over time.

Overall, KingsCrowd tracked $392.5 million invested in Reg CF deals and $328.9 million invested in Reg A raises. Dollars invested in 2022 were down when compared to 2021, but we expected that. The war in Ukraine, inflation, and a shaky stock market all contributed to investor pullbacks. But dollars invested in Reg CF deals only dropped by 14%, and we’ve actually seen deal flow slightly improve from 2021 – proving that online startup investing showed a healthy resiliency. If you’re interested in more stats about online startup investing in 2022, keep an eye out for KingsCrowd’s upcoming Market Intelligence Report!

As we roll into 2023, investors should brace themselves for challenges. It may take several more months for the Federal Reserve to get inflation under control and for stock market conditions to improve. Or things may change faster than we think. Regardless, online startup investors should continue to keep an eye out for high-quality deals.

“Platform” is defined here as the SEC-registered intermediary (broker-dealer or funding portal), or if none, the primary non-broker or non-funding portal platform conducting the offering.

Prioritizing Product DifferentiationIn my past career as a strategy consultant,… ...

All the latest equity crowdfunding deals from across more than… ...