The Impact of StartEngine's Acquisition of SeedInvest - KingsCrowd Skip to content
Become an owner of KingsCrowd.
Invest Today!

The Impact of StartEngine’s Acquisition of SeedInvest

In late October, major online startup investing platform StartEngine announced that it was acquiring fellow platform SeedInvest. The deal still needs approval from FINRA before it can be finalized. But if it does go through, this will be a notable consolidation within online startup investing in the US. StartEngine and SeedInvest are both considered to be industry-leading platforms for the space. So just how impactful will it be for them to join forces? 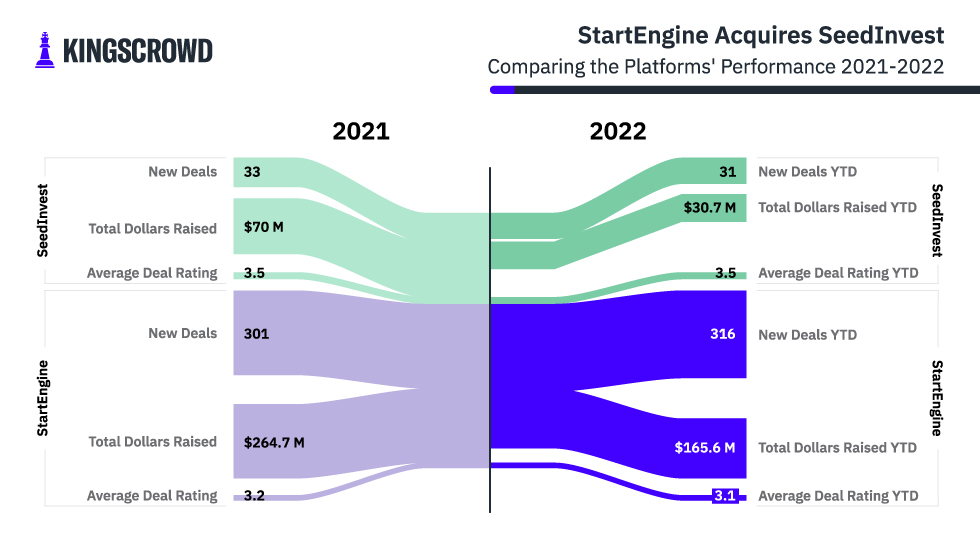 When directly comparing the two platforms’ performance in 2021 and 2022, it’s clear that StartEngine is leagues ahead of SeedInvest. StartEngine had close to 10 times more deals than SeedInvest and nearly four times the amount of dollars invested in 2021. And while both platforms have seen less capital invested this year, StartEngine still far exceeds the number of deals offered by SeedInvest.

Looking at these figures, it may seem like StartEngine’s acquisition will have little impact on its overall performance. But context is key. When it comes to dollars invested in Regulation Crowdfunding (Reg CF) deals specifically, StartEngine repeatedly comes in second place behind Wefunder. But Wefunder almost exclusively offers Reg CF deals, while StartEngine and SeedInvest regularly provide access to both Reg CF and Regulation A (Reg A) deals. And that’s where the plot thickens.

In 2021, StartEngine’s $264.7 million in total dollars invested was almost evenly split between Reg CF and Reg A deals. SeedInvest, however, had far more dollars raised from Reg A deals (around $59.6 million) than Reg CF (just a bit more than $10 million). Since Reg A deals have higher investment maximums, it makes sense that these deals can bring in far more dollars than their Reg CF counterparts. And it might be that StartEngine intends to continue offering high-goal Reg A deals through its SeedInvest acquisition. If StartEngine can successfully inherit SeedInvest’s history of strong Reg A offerings, it may be able to stay in league with Dalmore Group when it comes to overall dollars invested across the platforms.

There are other benefits to the StartEngine-SeedInvest merge that are more difficult to measure. StartEngine claims that the acquisition will double its user base, which would certainly be a significant boon. But perhaps more significant is how this acquisition could give StartEngine a route into tokenization.

For the past few years, SeedInvest has been pursuing tokenized offerings. The platform recognized that there’s a major lack of liquidity in startup investing. And paired with that, initial public offerings (IPOs) aren’t as common as they once were. So while investors could build wealth on paper through startup investments, they had limited options for turning those gains into real wealth. SeedInvest wanted to use tokenized offerings — essentially applying technology and strategies from cryptocurrency to create a new security type in online startup deals — to bring more flexibility and liquidity to the market. The idea was that investors would receive crypto tokens which represented their investments in a startup. And eventually, exchanges would be created where investors could trade those tokens.

So far, SeedInvest’s vision of a crypto-equity hybrid has yet to be fully implemented. Perhaps StartEngine will be able to move this goal forward. But even without tokenization, there’s no doubt that this acquisition is a milestone in the evolution of online startup investing. Consolidation is a normal part of an industry’s maturation. And StartEngine is poised to maintain its position as a leader in the space.

Investing in films is a great way to support artists… ...

Why the South Could Soon Beat the West in Startups

How Much Is Defensibility Worth?