The Most Popular Platforms in KingsCrowd Portfolios - KingsCrowd Skip to content
Become an owner of KingsCrowd.
Invest Today!

The Most Popular Platforms in KingsCrowd Portfolios

The KingsCrowd portfolio tool has now been live for more than a year! This tool allows investors to track their startup investments — regardless of platform or company — all in one place. It also shows how your investments break down according to industry — so you can easily see how diversified your portfolio is. If you haven’t had the chance to check it out yet, our guide can be found here.

For this chart of the week we decided to look at the investments being tracked in KingsCrowd portfolios to see which platforms are the most popular. These numbers are representative of user-entered data and may not reflect actual investments. 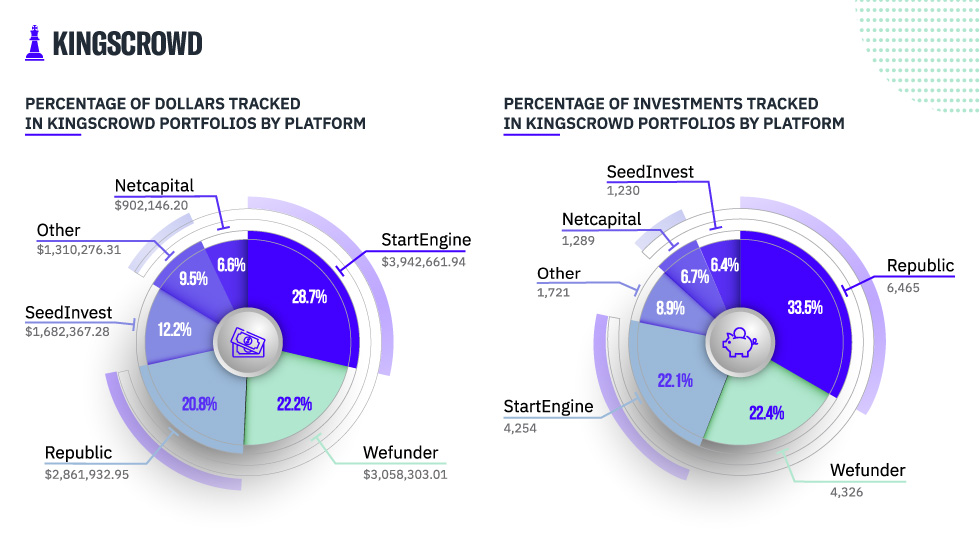 However, Republic’s lead is not reflected in the breakdown of tracked investment amounts. Instead, StartEngine has the highest percentage of portfolio-tracked investments amounts at nearly $4 million. Wefunder follows at $3 million, and Republic is third with $2.8 million. So while a third of all investments tracked in KingsCrowd portfolios originated on Republic, only 20.8% of all dollars tracked in KingsCrowd portfolios are attributed to raises on Republic. Assuming these are representative of actual investments, this would mean that investors are backing many Republic raises but only investing small amounts of money in each raise — around $440 on average.

Netcapital and SeedInvest were also in the top five platforms tracked in KingsCrowd portfolios in both metrics. Unlike Republic, SeedInvest had a much higher share percentage of dollars invested than percentage of overall investments — 12.2% of total tracked dollars but only 6.4% of total tracked investments. This is likely due in part to increased check sizes and Regulation A deal flow. In fact, SeedInvest stands out for its higher investment minimums. Netcapital came in around 6% for both total investments and total dollars tracked in KingsCrowd portfolios.

How Can I Invest in Startups and Earn Money ?

The KingsCrowd portfolio tool has now been live… ...

The KingsCrowd portfolio tool has now been live… ...

What is Angel Investing And How Does It Work?

Angel investing is the form of investment done by friends… ...