Investors looking to add startups to their portfolios have a wide range of investment opportunities – almost too many. Not only are there hundreds of startups raising capital on any given day, there are also about 70 registered crowdfunding portals where investors can find those startups. Paging through dozens of platforms to find a startup that fits an investor’s personal investment thesis suddenly becomes an enormous task. Some investors may choose to focus their time on the platforms that have the highest success rates as a way of reducing risk and saving time.

Although many companies try raising capital through crowdfunding, not all of them succeed. A successful funding round is defined by a company’s ability to hit its minimum funding goal. An unsuccessful round occurs when a company doesn’t meet the minimum funding goal or withdraws its campaign. When startups fail to meeit their minimum goals, they have to return any capital they have received to investors – and those investors do not gain stake in the company.  So which crowdfunding platforms have had the highest success rates for 2022 so far? Today’s Chart of the Week answers this question by looking at the percentage of successful and unsuccessful rounds across the top five platforms (platforms with the highest number of deals). 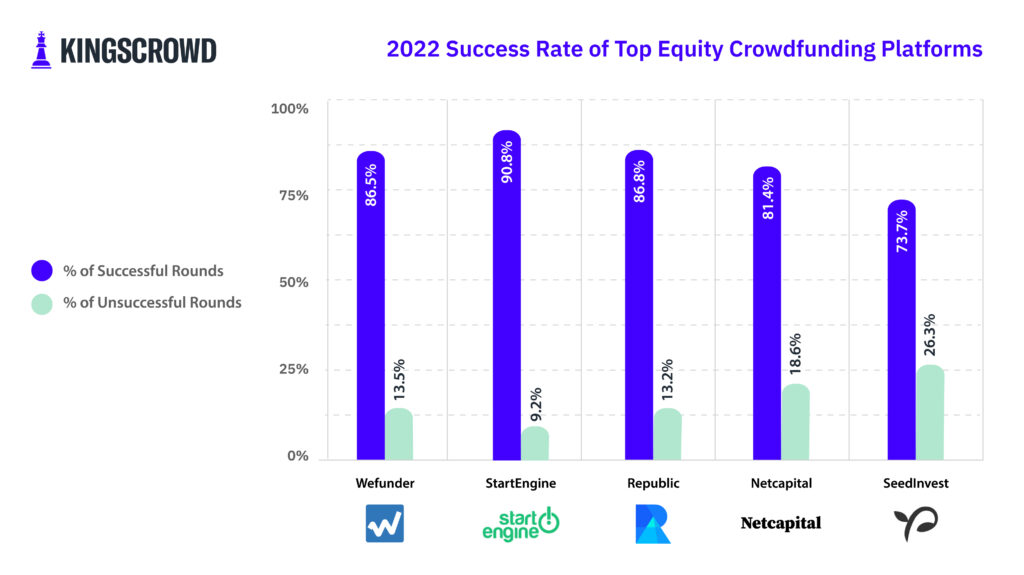 Between January 1, 2022 and May 31, 2022, companies raising capital on StartEngine had the highest rate of successful rounds at 90.8%. Republic and Wefunder were nearly tied with success rates of 86.8% and 86.5% respectively. SeedInvest came in at the end of the spectrum with less than 75% of its raises closing successfully.

The number of raises hosted by each platform is important to keep in mind with these results. Although StartEngine had the highest success rate, Wefunder hosted more raises. A total of 229 startups raising capital on Wefunder closed their rounds in the first half of 2022, compared to 209 companies on StartEngine and only 19 on SeedInvest. Across the top five crowdfunding platforms, there’s a wide range in the number of deals each platform hosts.

Startup funding success is influenced by multiple factors, such as marketing, size of the platform’s user base, founder recognition, each platform’s selectivity, and more. For example, StartEngine has Kevin O’Leary as a strategic advisor. O’Leary is a renowned businessman and a TV personality on “Shark Tank.” This can be a huge marketing advantage for startups hosted by StartEngine, as O’Leary is easily recognizable by many investors in the startup world.

Investors should also remember that all five of these platforms are well-established. KingsCrowd is seeing new smaller funding platforms emerge regularly. These new platforms are often focused on a specific niche of investing, such as space or impact investing. And there’s plenty of room for younger platforms to disrupt the online startup investing landscape. (Want to stay on top of the best deals across the entire equity crowdfunding market? Become a KingsCrowd Edge Member today and get data-driven ratings on every startup that’s raising capital online!)

Chris Lustrino meets with founder and CEO of Cleveland Whiskey… ...

What Does The Average Online Capital Raise Look Like?

The assumed goal of any equity crowdfunding campaign is reaching… ...

News from the Future: Crowdfunding in 2021