How Long Until the Next Funding Round? - KingsCrowd Skip to content
Become an owner of KingsCrowd.
Invest Today!

How Long Until the Next Funding Round?

Startups usually need quite a bit of capital to get off the ground. And that capital frequently comes from subsequent funding. Many companies raise multiple rounds via private equity crowdfunding — which is good news for investors who may have missed out on early rounds in a company they like. But how long do startups wait before raising additional capital online?

We examined 287 Regulation Crowdfunding and Regulation A deals that were repeat rounds of funding for companies. All of these rounds were either currently active or closed between January 2018 and September 2021. We bucketed the duration between raises into six month increments. 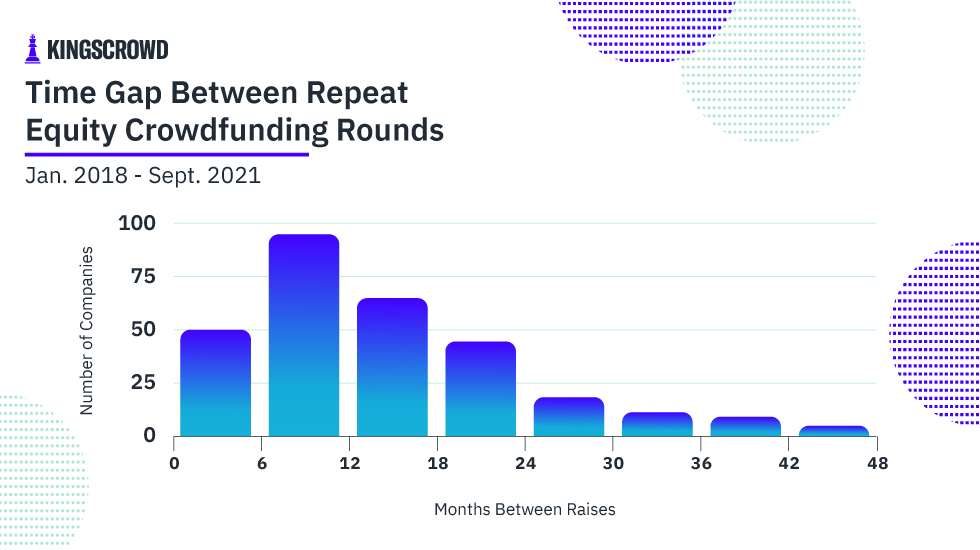 Across the repeat funding rounds that KingsCrowd has tracked, all of them took place within two years from the previous round. Around a third of companies waited six-to-12 months between raises. Interestingly, this wait time closely mirrors traditional venture capital repeat raises. The second most popular wait time was between 12-to-18 months while 42-to-48 months was the least common duration between raises.

The gap between raises generally widens in later stages as companies begin to sustain operations with inbound revenue. Thus, early stage startups raise more frequently than growth stage companies. The product type could also affect the time between raises. Companies that need to spend heavily on research and development — such as pharmaceutical or hardware companies — may need to raise multiple rounds in a shorter time frame. Investors can take these factors — company development stage and product type — into account when assessing whether a company will likely pursue future funding rounds and how long the time gap between raises may be.

Ant Group's historic IPO is cancelled, the SEC increases the… ...

About that whole “Season of Giving” thing…

With the holiday season firmly behind us, and maybe some… ...

How KingsCrowd Is Disrupting Startup Investing

Founder & CEO of KingsCrowd, Chris Lustrino sits down with… ...