With 2023 now well underway, we can finally look back at the end of 2022 with a new perspective. It was a jam-packed quarter for the economy at large, with historic interest rate hikes occurring in September, November, and December. The stock market suffered a rough losing streak. Cryptocurrency faced major upheaval amid the collapse of popular exchange FTX. All of this volatility has caused many investors to wonder how online startup investing will react. So let’s dig into some stats from the last quarter of 2022 and see how the online private market ended the year. 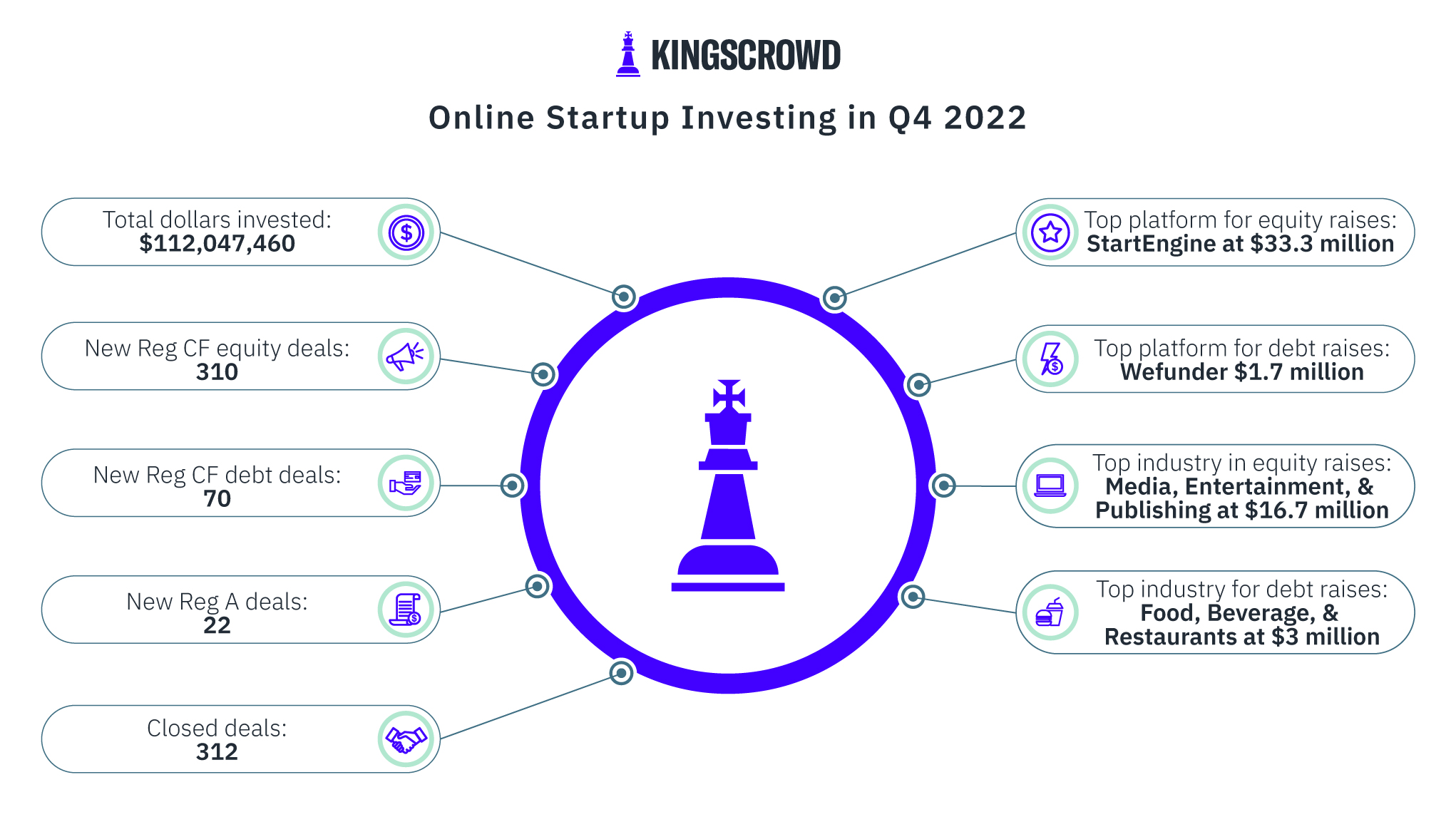 In the fourth quarter of 2022, more than $110 million was invested in equity and debt deals. Regulation Crowdfunding (Reg CF) received the majority of those investments, with $61.6 million put in equity raises and $8.5 into debt deals. The final $41.9 million went into Regulation A (Reg A) raises. That’s a notable drop for Reg A deals given that we tracked around $180.6 million in Reg A investments in the fourth quarter of 2021. Reg CF dollars are also down when compared to 2021 stats, though not as much.

When only comparing the fourth quarters of 2021 and 2022, a similar trend seems to emerge with the number of deals. Total new deals in the last three months of 2022 came in at just over 400. But the same period in 2021 had 571. While that may sound discouraging, total new deals are actually up when you compare all of 2022 to 2021’s total. It’s only the fourth quarter taken in isolation that lags.

These numbers tell an interesting story that is more rooted in investor confidence than in the popularity of online startup investing. Both Reg CF and Reg A raises saw a dramatic decline in total dollars invested compared to moderate increases in total deal volume. To me, this signals that although investors are becoming more conservative amid macroeconomic turbulence, founders aren’t shying away from the online private market as a means to raise capital. Steady deal flow is a definite positive for investors. Even if you’re looking to invest less often, you still want to know you’re getting top quality deals. The more raises to choose from, the more likely you are to find promising startups.

We recently determined the top platforms for all of 2022. And it’s intriguing to see some different top performers when only looking at the fourth quarter. When combining Reg CF and Reg A equity deals together, StartEngine led the pack with $33.3 million invested. Interestingly, Wefunder was the top platform for dollars invested into debt deals (despite being an equity focused platform), although MainVest was only behind by about $2,500. Splitting apart Reg CF and Reg A equity raises, Dalmore Group saw an impressive $22.3 million go into Reg A deals. With just eight deals in the fourth quarter of 2022, Dalmore Group came very close to StartEngine’s $25.7 million in Reg CF equity dollars. It’s not unusual for Reg A raises to generate more capital than Reg CF. Not only do Reg A deals have a higher raise cap ($75 million compared to Reg CF’s $5 million), but startups using Reg A tend to be better established and can inspire investors to feel more confident in them. Consequently, we may see platforms with Reg A offerings continue to gain more market share in 2023.

When it came to most funded industries, Media, Entertainment, and Publishing won out for the quarter with $16.7 million in capital deployed into equity deals. This industry was also the top industry from 2021 at large, though Financial and Insurance Products and Services came in at a very close second that year. Interestingly, many believe that industries like fintech were overfunded by venture capital in 2022. Perhaps online startup investors are simply ahead of the curve here, avoiding the buzziness of fintech startups and looking more to long term potential.

It is important to keep in mind that online startup investing does not exist in a vacuum. Last year proved that equity crowdfunding can feel the crunch when the general economy suffers. But startup investing is inherently a long term strategy. Many of today’s top performing companies were founded during recessions (like Microsoft, Airbnb, Slack, and more). And with deal flow holding steady, savvy investors can still find promising startups to bolster their investment portfolios with.

“Platform” is defined here as the SEC-registered intermediary (broker-dealer or funding portal), or if none, the primary non-broker or non-funding portal platform conducting the offering.

This piece is a guest post from Rick Bentley, Founder… ...

Will You Swipe Right on Dating Apps as a Portfolio Investment

The dating game has long been considered taboo, but in… ...