Though there are many different kinds of startup investors — such as angel investors, venture capitalists, or retail investors using equity crowdfunding — one important factor all types of investors consider is valuation. Valuation is a measure of how much a company is worth. And when it comes to startup investing, it decides the amount of shares and equity investors will receive.

Now that online startup investing has been around for a few years, we’re starting to see more and more companies hold multiple rounds of online funding. Most of these companies see an increase in valuation during subsequent rounds. Sometimes, companies even become overvalued because they want to keep demonstrating success.

But these changes in valuation may make an investor wonder about when the best time to invest is. An increase in valuation is good news to early investors because their return on investment increases alongside valuation. But higher valuations might not be favorable for new investors, as it could mean less potential return in the future.

So when investors wait until a company’s next funding round to invest, what are they missing out on? 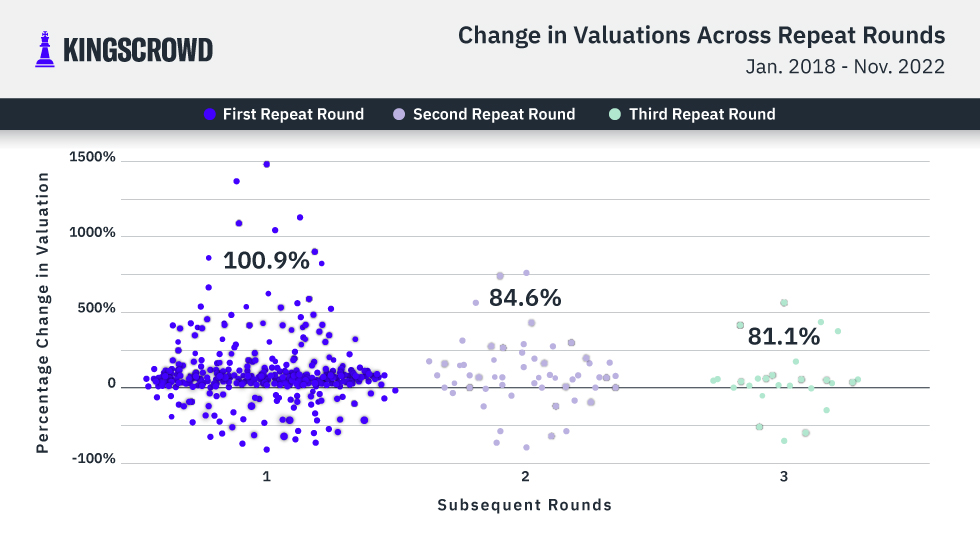 We examined 469 active and successfully funded Regulation Crowdfunding and Regulation A deals that were repeat rounds. On average, startups increased their valuations by 100.9% in the first repeat round, 84.6% in the second repeat, and 81.1% in the third.

Within the first repeat round, nearly two-thirds of all companies had valuation increases of 25% or more. However, less than 30% of second repeat rounds showed the same growth. Investors who got in earlier rounds had better returns on paper than investors in later rounds.

But the question of whether to invest early or wait for later rounds isn’t just about returns. It’s also about how much risk an investor is willing to take on. Early stage startups can have lucrative deal terms, but they are risky and unproven with uncertain futures. By waiting for a subsequent funding round, investors can see if the company met its initial milestones and increased its performance as well as whether the valuation was justifiable to begin with.

But keep in mind that a valuation increase does not always reflect the true value of a company. Some companies might overvalue themselves even without achieving significant progress or hitting certain milestones just to satisfy past investors on paper. But this strategy can be problematic in the long run, as the company might not be able to exit (through acquisition or going public) for the value it set. And when valuation mismatches the actual performance of a company, investors might see weak returns or even lose their investments.

This chart can help you weigh your investment strategy across repeat rounds. The earliest round has potential for much better returns, and each subsequent round reduces that potential for investors. But waiting until later rounds to invest is a better approach for the risk-averse investor. There isn’t a wrong answer here. It all comes down to which strategy works better for your goals and needs.

Whether you are thinking of investing in the very first round or in a subsequent one, always do your due diligence and determine whether the valuation of a company is fair. Assessing a company’s valuation is a key part of KingsCrowd’s startup rating algorithm. Become an Edge Member today to unlock access to these ratings!

How the JOBS Act Changed the Investment Climate

The Jumpstart Our Business Startups Act (JOBS Act) was signed… ...

The IMF revised its predictions for the global economy, Stripe… ...