At KingsCrowd, our mission is to make startup investing accessible to everyone by providing tools, resources, and ratings. Since 2018, we have collected data for more than 4,000 Regulation Crowdfunding (Reg CF) and Regulation A (Reg A) deals. For each startup, we collect around 500 data points on everything from market potential to product differentiation. And our proprietary rating algorithm uses those data points to score the investment potential of each deal with a score from one to five. (Become an Edge Member today to unlock access to these ratings!)

Investors looking for startups can find deals on dozens of platforms. And this number keeps increasing every year. Some platforms are general, open to startups from any industry or focus — like Wefunder, Republic, and StartEngine. But others have a specific niche. Spaced Ventures, for example, focuses on startups raising in the space industry, while Ignite Social Impact focuses on companies that take on societal and environmental challenges. With so many sources for deals, it can be hard for investors to know where to look for high quality deal flow.

In this Chart of the Week, we explore the 10 platforms that have the highest average rating for their Reg CF and Reg A deals since the beginning of 2022. 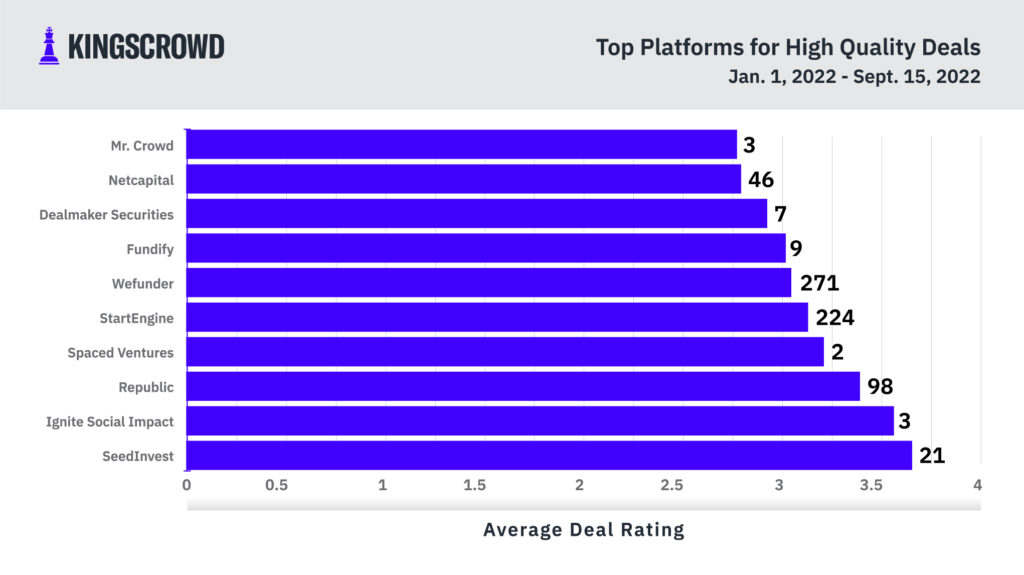 Note: Numbers to the right of the bar reflect the number of raises the platform had.

Across the top 10 platforms, average ratings range from 2.76 to 3.65 (out of the 5 point maximum). SeedInvest came in first with an average rating of 3.65, followed by Ignite Social Impact and Republic. The last of the top 10 was Mr.Crowd at an average of 2.76. That’s a pretty wide variance. The other big thing to note is that the number of deals on each of these platforms is wildly different. For example, Spaced Ventures has a higher average rating than StartEngine. But it only had two raises compared to StartEngine’s 224. This has skewed the data since 224 data points will naturally introduce more variation than only two points.

However, there’s an important takeaway hidden in this data — more doesn’t necessarily equal better. StartEngine and Wefunder have both had more than 200 deals so far this year. But both platforms fell in the middle of the ratings ranking, with average deal ratings between 3.0 and 3.5. Granted, any score of three or higher tends to indicate a potentially promising deal. So StartEngine and Wefunder aren’t hurting for high quality deals. But neither platform was particularly stellar either.

Some of these results may come from how platforms source their deals. Broader platforms will have a variety of raises that span multiple industries and development stages. But deal volume is naturally going to be lower for the platforms that focus on niche markets. However, niche-focused platforms also have to be very selective to ensure that a startup fits their values or thesis. That selection process may help them identify higher quality deals. While it’s impossible to say definitively that a platform with just two or three deals is a good source for high quality, the fact that those few deals received high ratings is worth noting.

Given the wide range of average ratings in this top 10 set, investors may want to avoid relying on a platform as the first step to finding high quality deals. It seems that good deals aren’t exclusive to a certain platform. Instead, promising startup investment opportunities exist through the online private markets. That’s why KingsCrowd is dedicated to tracking and rating every deal out there, so you can find your next startup investment with just a few clicks.

A Clear Difference Between Early Stage and Growth Stage

When comparing the average valuation of early stage and growth… ...

On this episode of the KingsCrowd Startup Invest Podcast, Sean… ...

What is a SAFE And What Does It Mean For Me?

SAFE stands for Simple Agreement for Future Equity. It is… ...