More Than $88 Million Went to Female Founders in 2021 - KingsCrowd Skip to content
Become an owner of KingsCrowd.
Invest Today!

March marks Women’s History Month. And that makes it a good time to see how female entrepreneurs fare when raising capital for their companies. Female founders have long been underrepresented in venture capital (VC) funding. VC funding hit an all-time-high in 2021 – but less than 2% of it went to female-founded companies. Even as more companies are founded by females, VC bias is still present. Between 2008 and 2018, the number of startups founded by a female founder increased from 4% to more than 20%. But in 2018, for every $1 raised by a female founder, male-only startups raised $8.33.

But has this deep-rooted bias been translated into the online startup investing world? Our data shows some good news. 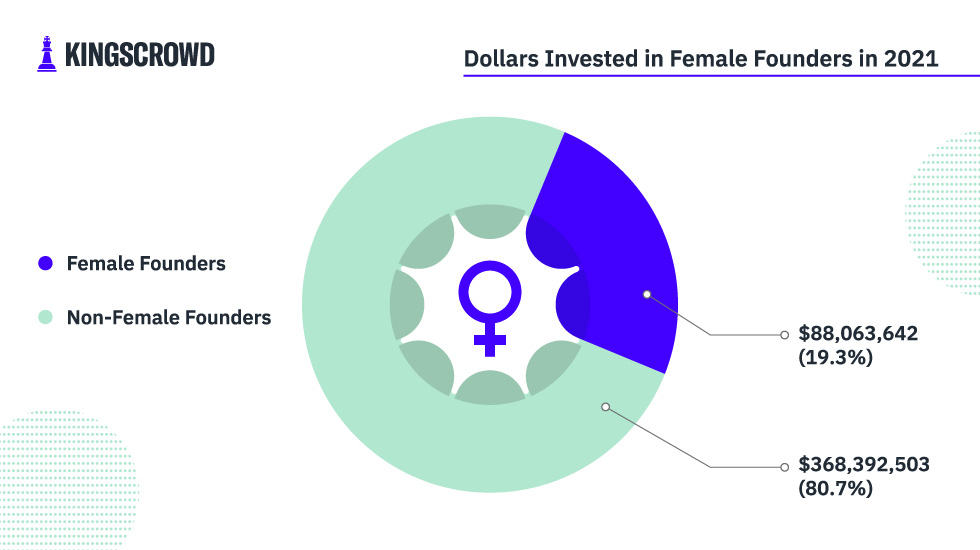 Awareness for female-founded startups is on the rise as people are starting to challenge biased views of entrepreneurship and startup investing. Although even the crowdfunding space seems to be skewed to non-female founders, this could be due to multiple reasons. There are fewer women-founded startups raising capital in the space, and women are still underrepresented in entrepreneurship, which means it will take time for them to be equal with their male counterparts. The industries targeted by female-founded startups also matter. Investors might prefer to invest in specific industries where women are still underrepresented. It’s also possible that the industries where female founders are most common tend to have smaller companies with lower funding needs. Stay tuned next week when we look at the top industries with female founders.

However, it is already clear that the online private market is challenging VC’s biases and progressing towards a more equitable model of funding.

The newest online equity crowdfunding campaigns from across 20+ platforms. ...

The latest crowdfunding campaigns from across 40+ platforms. All deals… ...