Why Female-Founded Startups Have Lower Valuations

Retail investors have invested more in female founders than traditional venture capital (VC) investments on a percentage basis. Female founders received 9x funding through online startup investing compared to VC in 2021. Even with this progress, female founders still face barriers when it comes to raising capital. Although female-founded startups exited a year faster in 2020 compared to the overall market, their median valuation only increased by 4% – far below the 15% increase seen by the overall market. Furthermore, the median post-valuation of female-led startups was around 50% lower than all startups in 2017.

Startup valuations are a key metric. A company’s valuation determines the price investors pay to get a share in the startup. It can also be a reflection of the worth of the business and its product. If female-led startups are routinely seeing lower valuations in the VC ecosystem, it may indicate that VC investors see these startups as having less potential than other, likely male-led companies. So does the crowdfunding market follow the same trend? 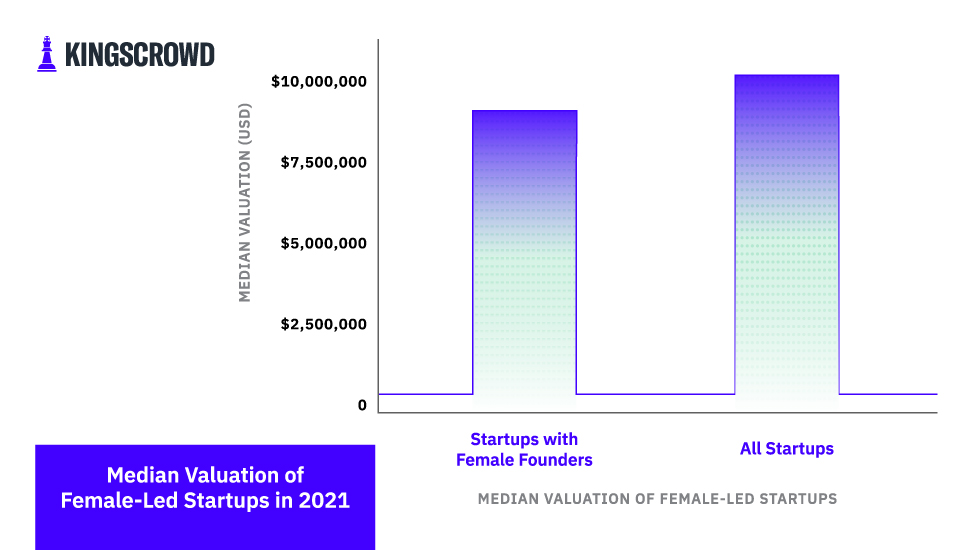 Another reason for low valuations could be the stage of the startup. KingsCrowd data shows that 82% of female-founded startups were categorized as early stage startups. Only three-quarters of male-founded startups were early stage, and 79% of all startups raising capital online were early stage. Early stage startups are usually less mature – with no or limited revenue – and therefore tend to have lower valuations. So if anything, this could mean that crowdfunding is enabling female founders to raise capital and set their companies up for success early!

KingsCrowd is offering accredited investors the opportunity to invest in… ...

The latest equity crowdfunding campaigns from across 40+ platforms. All… ...

A summary of how KingsCrowd selects companies to receive Analyst… ...